THE SKYRUNNER® VIRTUAL SERIES GATHERS 81 NATIONALITIES AT THE START LINE 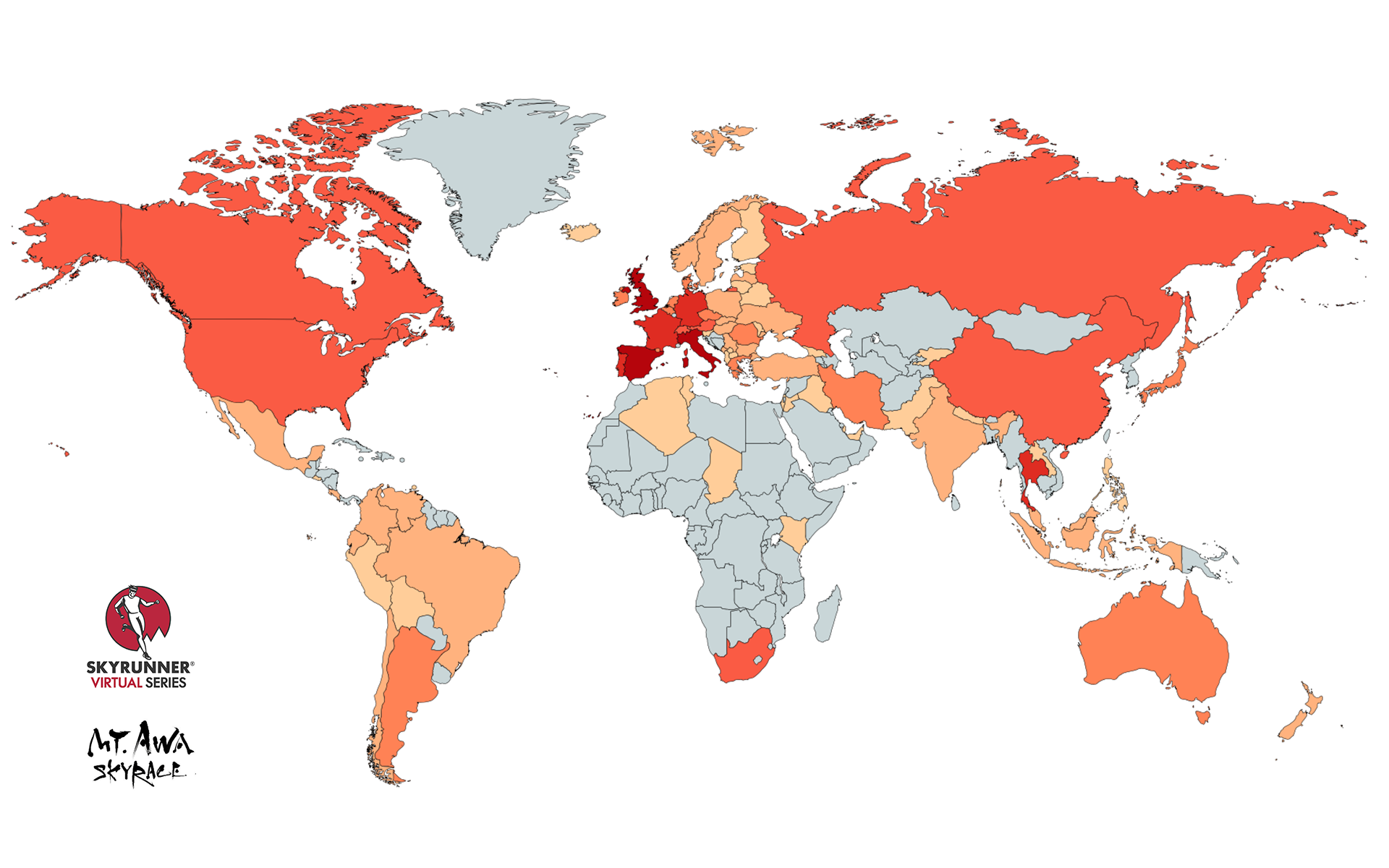 Thousands of skyrunners from 81 nationalities participated in this weekend’s virtual Mt. Awa Skyrace, the second race of the Skyrunner® World Series’ virtual circuit.

After just two races, the pre-season Easter Race and this Sunday’s Mt. Awa Skyrace, the Skyrunner® Virtual Series is already proving to inspire and unite people all over the world. Not only is the global skyrunning community getting involved in the action, but the series has reached new audiences in countries where participation in skyrunning events has, until now, been relatively low, such as Thailand and Iran. One fan from Thailand comments:

“I have followed the circuit for many years and am a big fan of the sport, although never having taken part in a race myself. The Skyrunner Virtual Series has made me feel a part of the community and is a great initiative to help us all stay motivated and feel connected during this difficult time of isolation.”

With the highest number of registrations coming from Italy and Spain, two of the countries worst hit by the coronavirus, the series has become a source of distraction, giving many individuals in isolation a feeling of togetherness and community.

The majority of participants have entered the virtual series through the “Runner” category, therefore running – indoors or outdoors – for 45 minutes from 09:30 am CET. A “Popular” category is also available where participants can do another form of sport, such as indoor cycling, if they are unable to run. This sport must be completed within a twelve-hour timeframe on the day of the race. Since the start of the virtual series, social media has come alive with photos and videos showing the creative ways the community has got involved with the circuit. Runners of all levels and ages have been drawing race bibs, creating racecourses and even editing their own race highlights as a way to forget the current situation and have some fun.

Over 50,000 people tuned in to the live and interactive broadcasts of both races to watch how an all-star international elite field of skyrunners took on the challenge at home whilst following the government guidelines in their countries. Live shows featured guest presenters including elite athlete, Andy Symonds, and athlete manager and commentator, Martin Gaffuri.

Viewers were able to follow well-known names such as Holly Page (GBR), Hector Haines (GBR), Denisa Dragomir (ROM) and Christian and Landie Greyling (RSA) as they completed their own racecourses outside in their garden or close to their homes. Other elites including Tom Evans (GBR) and Aritz Egea (ESP) stayed indoors and raced on their treadmills, whereas skyrunning star, Jan Margarit (ESP) showed his ability to adapt to the current situation by skipping his way through the 45-minute race with a rope.

During the latest live broadcast of the Mt. Awa Skyrace, the Skyrunner®  World Series team surprised elite runner, Jan Margarit in Spain, by connecting him with his girlfriend, Perrine Abadie, who he has been separated with for weeks since she has been in quarantine in her home country of France. The live scene was sure to have delighted the young couple and touched viewers around the world who may be in a similar situation. Margarit comments:

“I’ve been enjoying the Skyrunner Virtual Series with my skipping rope. It’s different from the usual skyrunning events but a great idea to keep us motivated while staying at home and trying to stop the virus. It was a great surprise to have my girlfriend in the live show with me. Thanks to everyone who participated and to the Skyrunner World Series for creating this great environment. Although I can’t run, I’m looking forward to the rest of the season.”

Seana Forbes, SkyMan SA representative comments: “It has been incredible to see the level of involvement and positive feedback we’ve received for the virtual series. The goal of the virtual series and with the live broadcast has always been to connect people and make our worldwide community feel as though they are in something together, even though they may be many miles apart. We see this as an opportunity to use our channels as a platform to give people something positive during this difficult time, therefore we will continue looking for new and fun initiatives to entertain our viewers in the upcoming virtual races.”

The Skyrunner®  Virtual Series continues on May 9th where the entire skyrunning community will be transported to Spain to the volcanic island of La Palma for the virtual edition of Transvulcania.