Ueda of Japan wins in home country! Desco first of the girls!

The Mt Awa Skyrace® was a dream come true for Ruy Ueda of Japan, who proudly crossed the finish line with the first win of the season in his home country. Elisa Desco of Italy pulled off an incredible performance beating a strong field of women to the finish line in first place.

The season opening Sky Race of the 2019 Migu Run Skyrunner® World Series presented an international lineup of skyrunning superstars. 31 elite athletes from 13 countries assembled beneath the cherry blossoms at the starting line of the Mt. Awa Skyrace® in Sanjo Japan, where they battled it out on a slightly shorter “B Course” due to avalanche warnings.

Despite the new course having 6km and 800m of elevation gain less than the original, runners remained in high spirits and looked forward to an extremely fast race – and that’s exactly what it was. Race winner, Ruy Ueda said his background in road running helped him gain speed at the beginning and take the lead very early on, just in time for the technical uphill.

“Today was my fastest race. I wanted to get a head so I pushed hard for the first few kilometers and managed to stay in front of Jon Albon. I could feel Jon and Oriol very close behind me on the last downhill so that was scary but I am very happy that I could keep my position and proud to win a Sky Race in my home country.” Ueda crossed the finish line in 2h01’42”, just 9 seconds ahead of Oriol Cardona, the rising start from Spain who finished in second place and 18 seconds before Great Britain’s Jon Albon who closed the men’s podium with a time of 2h02’04”.

“It was a fun course with many ups and downs but I just didn’t have it in my legs today. I enjoyed it though and it was a great way to start the season.” Said a smiling Jon Albon at the finish line.

The women’s race was equally as unpredictable as the men’s with Megan Kimmel from the USA, Elisa Desco of Italy, Takako Takamura of Japan, Sheila Avilés castaño of Spain and Hillary Gerardi, also USA, competing against each other from start to finish.

At km 17, Kimmel was in the lead with Desco very close behind her. Avilés Castaño followed in third place with Takamura and Gerardi in joint fourth. Desco, however, seemed to fly for the last downhill, finally taking the lead over Kimmel and crossing the finish line in 2h27’46”.

The race between Kimmel and Desco seems to be nothing new. “Elisa and I were playing leap frog almost all the way up and then once we hit the snow I was barely in the lead but it just wasn’t enough for Elisa’s downhill skills as usual.” Said Kimmel who finished less than one minute behind Desco. Japan’s Takamura managed to speed up for the last 2km, securing her place on the podium with a time of 2h28’56”.

It’s safe to say that the Mt. Awa Skyrace has set the bar high for the rest of the season. 9 nationalities made up the top 10 men’s podium, highlighting the globalization of the sport and how committed these top athletes are to the Migu Run Skyrunner® World Series circuit. 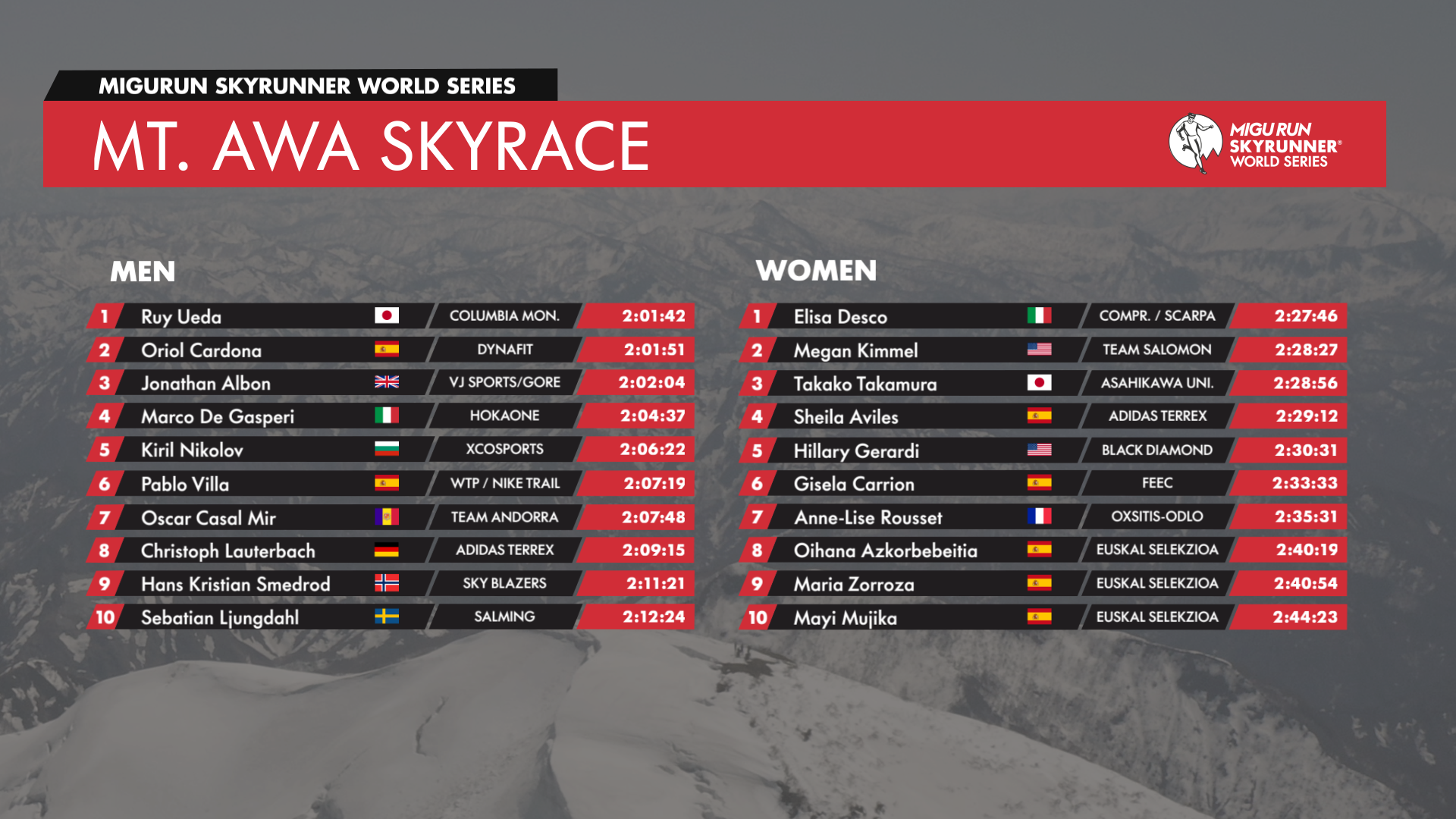 No.4 in the 2019 overall ranking & the fastest downhiller of the season, @ZaidAit_Oficial is back and he’s ready to claim the2020 title!
“My goal this year is to discover new places and enjoy the mountains but of course I want to win!”
📸SWS/@BergGrand
#skyrunnerworldseries20