Millions of people gave up animal products this month for Veganuary but did you know that elite skyrunners, Lina and Sanna El Kott, follow a plant-based diet all-year-round? Since 2016, the Swedish twins have shared the podium at Skyrunner World Series races around the world, making them prime examples of the athletic achievement that can come with plant-based eating.

Here the Swedish power-duo explain the benefits of a plant-based diet and talk us through the foods that provide them with the endless energy they need for their skyrunning season and long training days in the mountains.

When and why did you go vegan?

Sanna: We have been vegetarian for around 15 years but then five years ago Lina stayed with some friends who were vegan and decided to try it out.

Lina: I didn’t like cheese or other dairy products and I also didn’t agree with the meat-producing industry and how they were using animals for this reason so I decided to stop.

Sanna: Since we live together and Lina does most of the cooking, I didn’t really have a choice so I became vegan too.

Can you tell us what veganism actually is?

Lina: Well, we aren’t actually strict vegans but our diet consists of plant-based whole foods, this means nothing from animals, no meat, no dairy, no processed foods, everything is very natural or refined as little as possible. Strict vegans don’t wear leather or down and although we don’t buy those kinds of things anymore, we still wear our old garments from when before we were vegans rather than throw them out.

What kind of benefits have you experienced in your athletic performance from a plant-based diet?

Lina: Since we ate mostly vegan foods already when we were vegetarians, so for the past 15 years, we don’t really feel a change or a benefit as such but we do believe the energy we have to train and race for long hours comes from the foods we eat.

Sanna: The only thing I know is different to many people who don’t follow a plant-based diet is that I don’t feel sluggish or heavy after eating. I feel good, I never feel bloated or anything.

And what made you become vegetarians in the first place?

Lina: It was purely for ethical reasons. We love animals and didn’t want to eat them, especially when there are so many other options.

Being athletes and traveling a lot for the Skyrunner World Series, do you find it difficult to keep it up?

Sanna: Yeah, obviously staying in hotels and traveling to remote locations in the mountains definitely makes it difficult. We always take our own lunch box and snacks like nuts and seeds and crackers or something with us in case they don’t have any options or anything that we like. If you see us carrying a big bag around at the races, that’s filled with all our snacks.

Lina: Yeah, we prefer to take our own food with us. Sometimes we’ll contact the hotel we’re staying at before and tell them we’re vegan and if it’s possible to have some vegan options.

Sanna: It takes a bit more planning and preparation but it’s getting better every year. 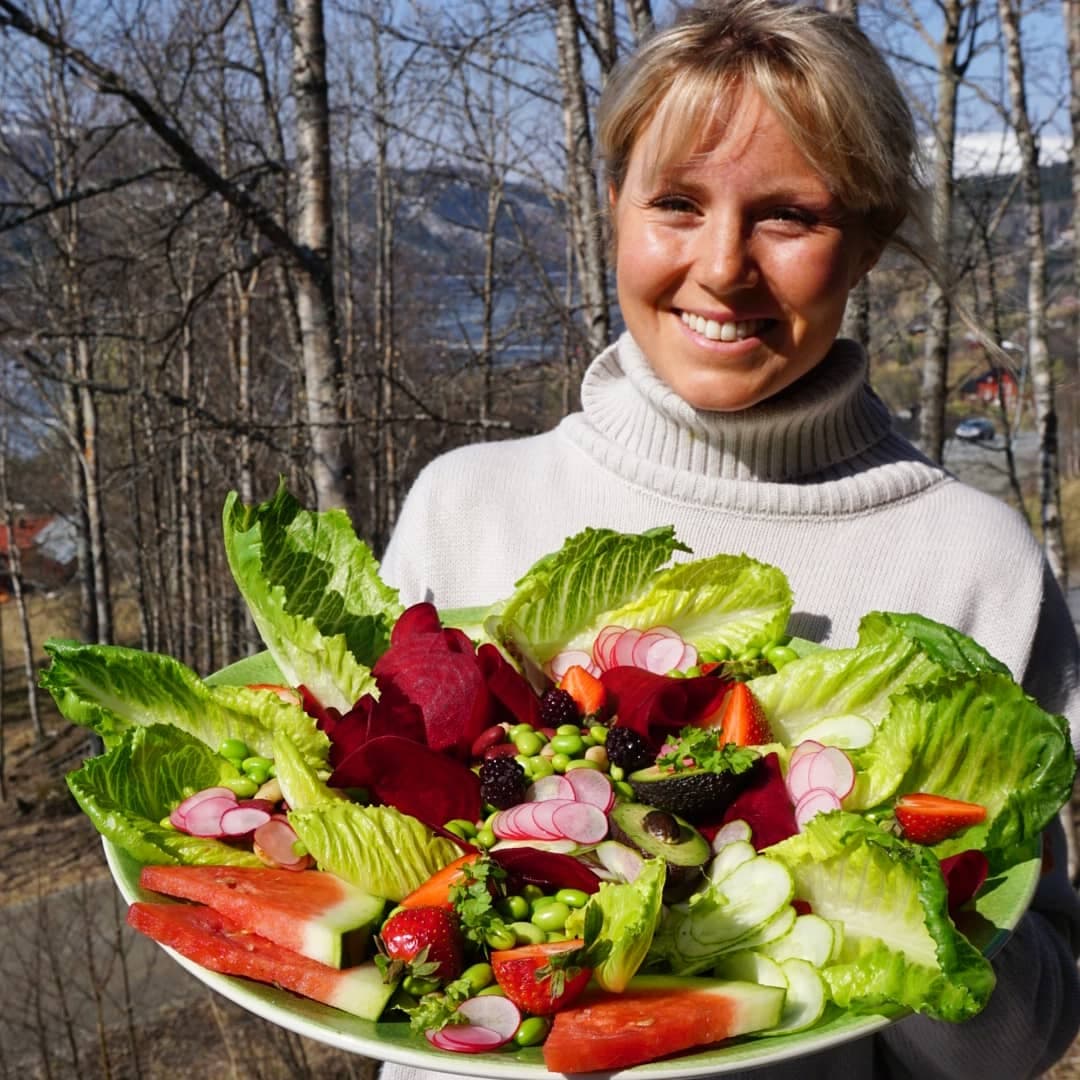 Can you give an example of the kinds of things you eat on a long training day?

Lina: Yeah, the topping is like the main thing. It can be fruit, berries, nuts, seeds, nut butter too. So yeah, oatmeal with soya milk, chia seeds, some zucchini…

Sanna: Yeah, you can just throw anything in and then we’ll add a sandwich to that with some nut butter or some other plant-based butter with vegan cheese, tahini maybe. Then for lunch, it depends on where we are. If we’re going to the mountains for a really long day, we’ll bring a lunch box with us with some raw veggies or beans. Beans because, as I said before, I don’t feel full if it’s just veggies, I need to have some protein or some fat.

Lina: For dinner, we’ll often make a big soup that we can eat over several days.

Sanna: It never lasts longer than two days though. [laughs] That’s the thing: we eat so much.

Lina: Yeah people are like, “You’re so small, you can’t eat that much”, but as a vegan, you really need to eat a lot to ensure you’re getting all the nutrients you need. Oh and another thing is, we always go back for a second portion.

Sanna: But yeah, going back to what we have to eat for dinner, some root veggies, maybe rice or pasta and then tempeh, beans or tofu. We don’t follow like high fat or low carb, we need a bit of everything.

Are you ever worried about nutrient deficiency?

Lina: It seems a lot of people, especially other athletes, are worried about missing out on nutrients if they follow a plant-based diet but since our diet is so varied it’s not been an issue for us. We eat a lot of nuts and nut butter or seeds so already there you have a lot of protein and fats. If you make a smoothie you can add beans as a source of protein and iron. Some people might think this sounds strange but when you blend it together in a smoothie, you don’t even notice there are beans in it. If you bake your own bread you can add protein to that too.

Sanna: If you’re really worried about protein, there are so many vegan protein powders out there now too so plenty of ways to ensure you’re getting the nutrients you need.

Do you take any supplements?

Lina: B12 because that’s the only thing you can’t get from a plant-based diet, I think. So yeah, we take B12 every day. We’ve never had any deficiencies so we didn’t feel the need to take any other supplements but it’s a good idea to check your levels regularly to make sure you aren’t missing something.

And what about your nutrition during a race, what kinds of things do you eat?

Sanna: Normally during a race, we’ll have some gels or grab some fruit on the aid stations.

Lina: It depends on how long the race is, sometimes we just drink but other times just a gel or a bar. You can find so many raw, vegan gels and bars these days and it’s also really easy to make them yourself.

Sanna: Yeah, most of the big sports nutrition brands offer vegan products that are really good so it’s not an issue finding this stuff.

Do you have any tips or pieces of advice, especially when it comes to sports and training, for someone who is thinking of switching to a plant-based diet? What should they be aware of?

Lina: I think they should use social media, like Instagram, because there are so many vegan accounts where they can get ideas or inspiration from.

Sanna: I always say to people that if you have a favorite meat dish, try to “veganize” it. It’s really simple actually. Just don’t be afraid to experiment and try new things. It’s all about variety as well. The more colours and different ingredients you have on your plate, the more likely you are to get all the nutrients your body needs.

Lina: For athletes who are looking for really energizing foods, we recommend nuts! They are like the magic food. Nut butter, oil, and tahini. When we have big salads, especially in summer, then we always add a lot of tahini and olive oil to the salad to get more energy from it.

Sanna: We know many athletes who follow a plant-based diet so people shouldn’t worry about it having a bad effect on their performance or recovery. For example, Kilian Jornet and Emelie Forsberg are not vegans but they are vegetarians at least.

Lina: We want to inspire people and show them that we still have a lot of energy and we are still able to train a lot even though we don’t consume any animal products. I don’t know where people get this idea that you need meat for energy or that you don’t feel full after eating vegan foods. As a vegan, you do need to eat more but we love food and we love to eat so that’s ok for us. 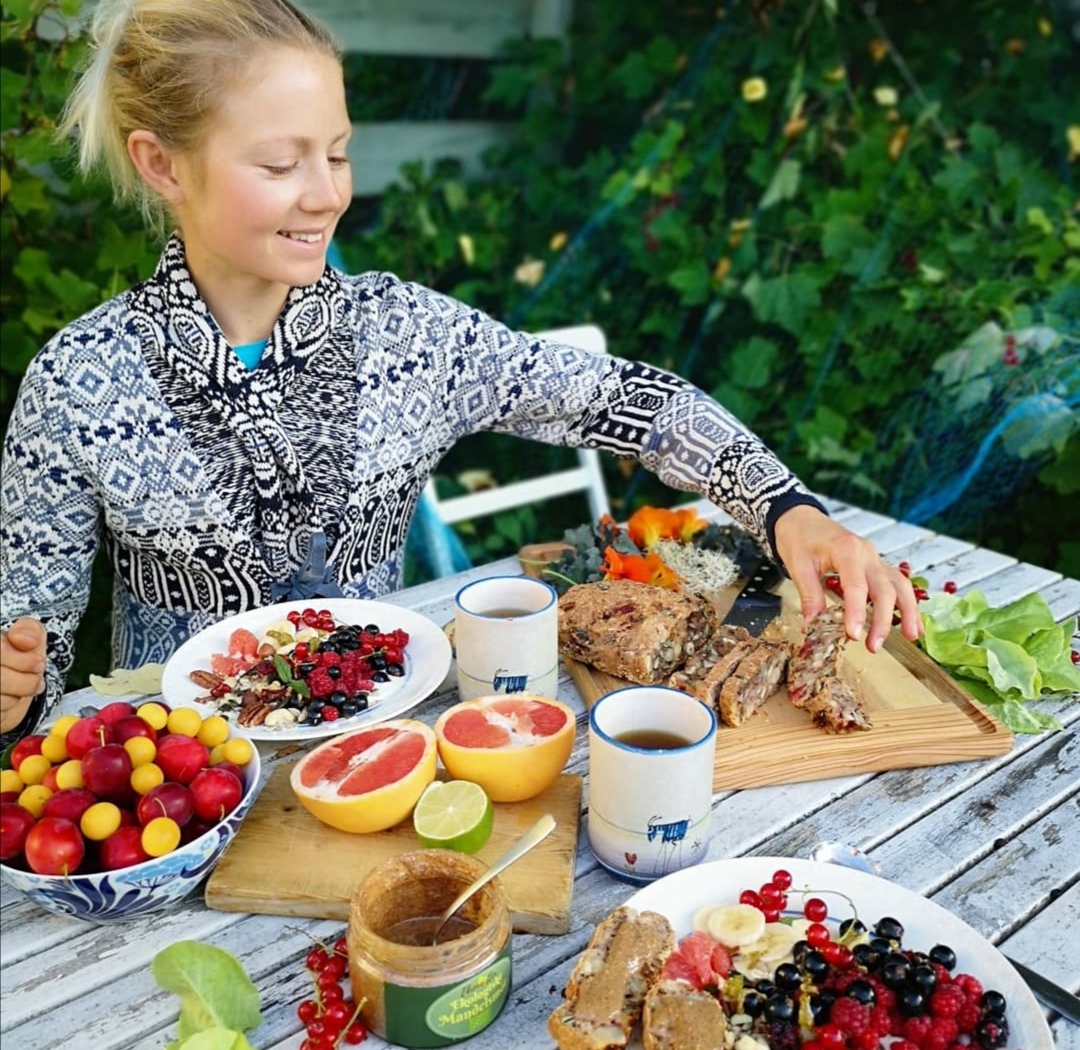 And what do you think about something like Veganuary? Do you think it’s a positive thing?

Lina: Yeah, we think it’s great and some people find it easier if they have a short-term goal.

Sanna: If you want to try it out, it’s a good idea to start with a month and see how it goes. You never know, you might find that you prefer it and decide to continue.

Thanks @mt.awaskyrace for giving us that feeling a

@mt.awaskyrace passes the baton on to the world as

SEE YOU AT THE STARTING LINE!
(although it will lo

We are pleased to announce that we were able to hold the 2021 edition.