Garrivier and Debats crowned King and Queen of Transvulcania 2019

Temperatures soared today on the island of La Palma, where the first SuperSky race of the Migu Run Skyrunner® World Series saw a spectacular lineup of athletes cross cloud lines and volcano ridges to be crowned king and queen of Transvulcania 2019.

There were many ups and downs for the runners of the Transvulcania Ultramarathon 2019. Favorites fell, literally and figuratively, and another unexpected star stole the show on the brutal 74 km course with 4,350m vertical climb.

After an incredibly fast start, young Swede Petter Engdahl, shot to the top of the first climb arriving at Las Deseadas (km 17 of 74) in 1h55’. Engdahl was followed closely by two favourites to win, Italy’s Marco De Gasperi and Ruy Ueda. In an unexpected turn of events, both De Gasperi and Ueda dropped out shortly after km 29 with Ueda citing the same stomach problems that caused the young runner to withdraw from the Transvulcania VK just days before.

From this point on, the top 3 men played an intensely hot game of downhill catch. Engdahl fought hard to keep his top position but this wasn’t easy with French runner, Thibaut Garrivier and Russian machine, Dmitry Mityaev, breathing down his neck. The pressure finally got to EngdahI and both Mityaevand Garrivier managed to seize their opportunity and jump into first and second position later in the race.

In the end it was Garrivier of France who crossed the famous finish line in Los Llanos de Aridane, La Palma, with a time of 7h11’04. Mityaev finished second in 7h14’23” and an exhausted Engdahl came third after 7h21’28”.

“Today I was in very good shape. I’m really happy with my time and the performance. It was a lot of pressure running together with Dmitry for about 6 hours but also a lot of fun.” Says Garrivier. After placing third last year, the French runner took some time out of his medical studies in order to prepare for the race today – a plan that definitely paid off. “I still had a lot of energy at the end and when I noticed that I couldn’t see Dmitry behind me, I pushed extra hard on the last uphill.”

Great Britain’s Jonathan Albon, king of long distance and technical terrain, struggled with the heat today but looked strong throughout the course. The three-time Tromso Skyrace champion managed to climb from 9th position at km 27 into 5th by the time he got to km 42 and finally crossed the finish line with an impressive 4th place in 7h36’34”.

Three women dominated the race from start to finish but the queen of Transvulcania 2019 was Ragna Debats from the Netherlands who was met at the finish line by her young daughter and partner, 2018 Transvulcania men’s champion, Pere Aurell.

“What I like about Transvulcania is the fact that it starts at sea level and goes all the way up, this is the sense of skyrunning. It’s difficult because many people start fast and afterwards, they pay for it. I knew I had to take my time and stay hydrated.” Said the incredible athlete who battled with Anne-Lise Rousset of France from very early on. “It was a disputed race because Anne-Lise took off very fast. I let her go but I tried not to let her go completely. At one point in the race I could feel she was slowing down and that’s when I passed her. Overall I’m really happy and it’s been a great race.”

After an intense head-to-head with Debats, Anne-Lise Rousset of France crossed the finish line in second place after 8h25’11”. Megan Kimmel from the USA, who beat Ragna at the last Migu Run Skyrunner World Series race in China, finished in 3rd position after 8h35’03”.

All three women will continue competing against one another throughout the Migu Run Skyrunner® World Series with their heart set on that overall ranking top spot.

The double points awarded to Garrivier from his SuperSky race win means he now sits at the top of the 2019 Skyrunner World Series overall ranking. Garrivier will continue to follow the Migu Run Skyrunner® World Series with his next race being the Skyrace Des Mathesyins in his home country of France. There he will be up against previous overall ranking number one, Oriol Cardona, who will no doubt be determined to win back the top spot.

Double points were awarded today to the top 20 male and female runners of the SuperSky Race. The Next race of the season is the Skyrace Des Mathesyins on May 19th in Saint-Honoré, France. 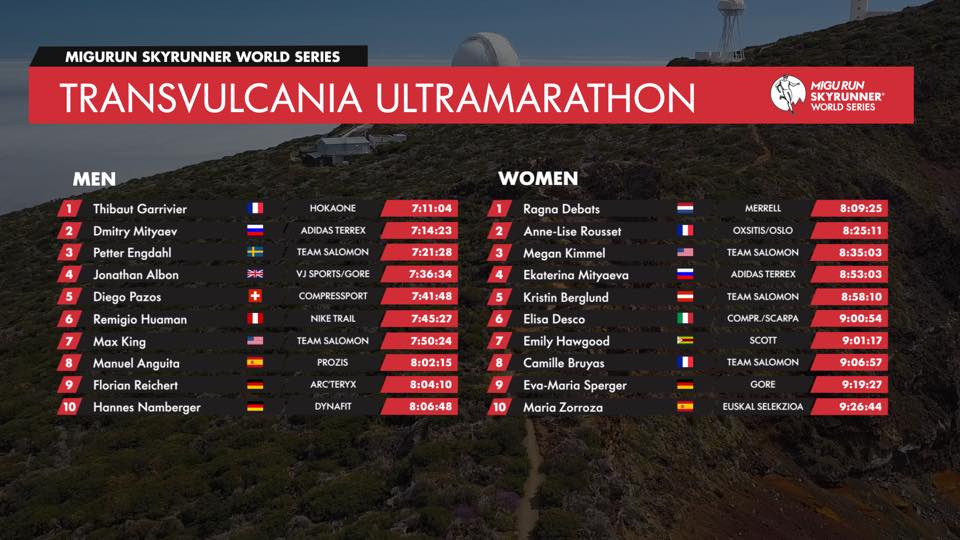