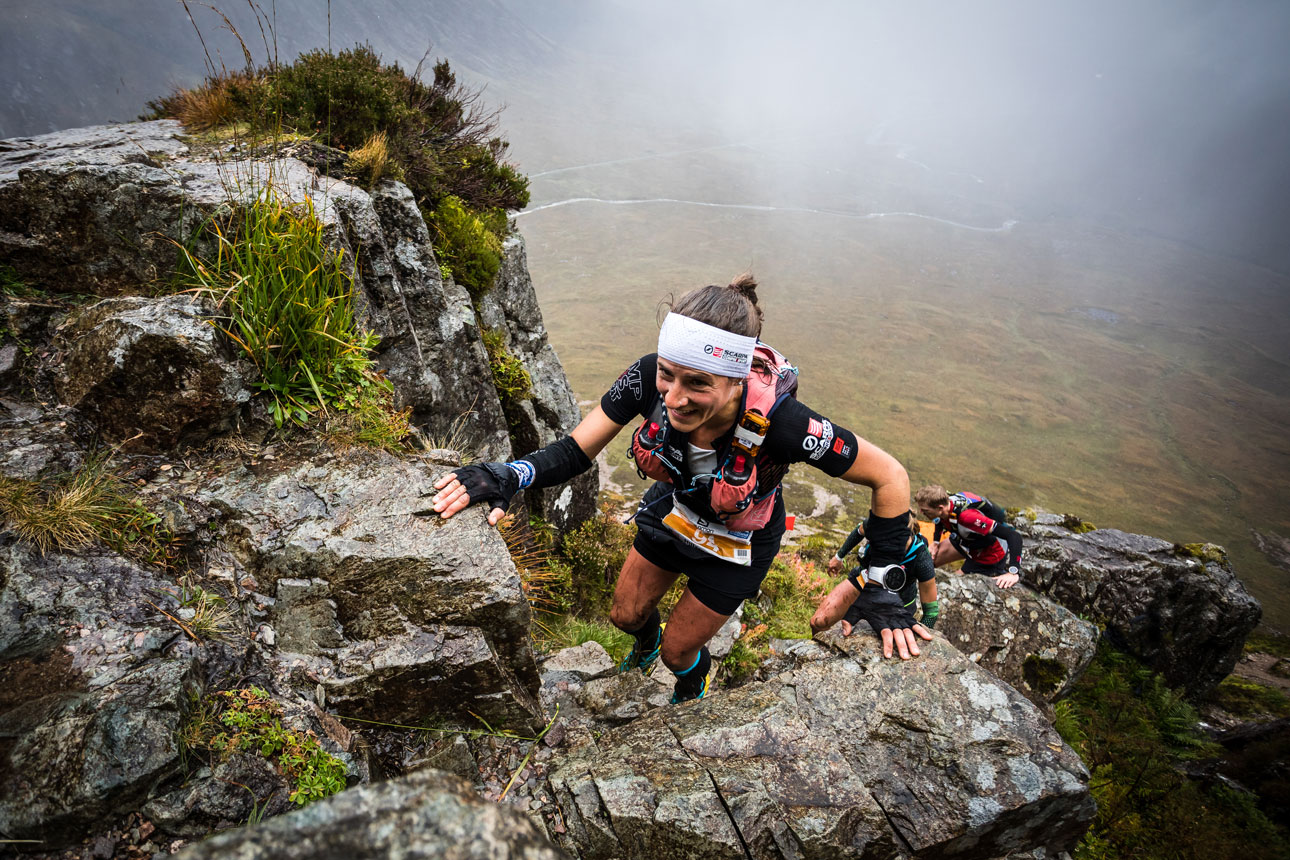 With wild and windy weather in the Scottish Highlands, the Salomon Glen Coe Skyline was run on a reduced course, but it didn’t take any of the excitement away from the star line-up that battled right to the finish line. The sixth stage of the Migu Run Skyrunner® World Series, valid for the Sky Extra category, was won by Kilian Jornet and Hillary Gerardi.

Probably one of the toughest races on the Series, it was run on the “bad weather route” which is just 32 km long with 2,700m vertical climb avoiding the exposed scrambling terrain. (The original course was 55 km with 4,700m vertical climb). 203 runners from 28 countries participated. 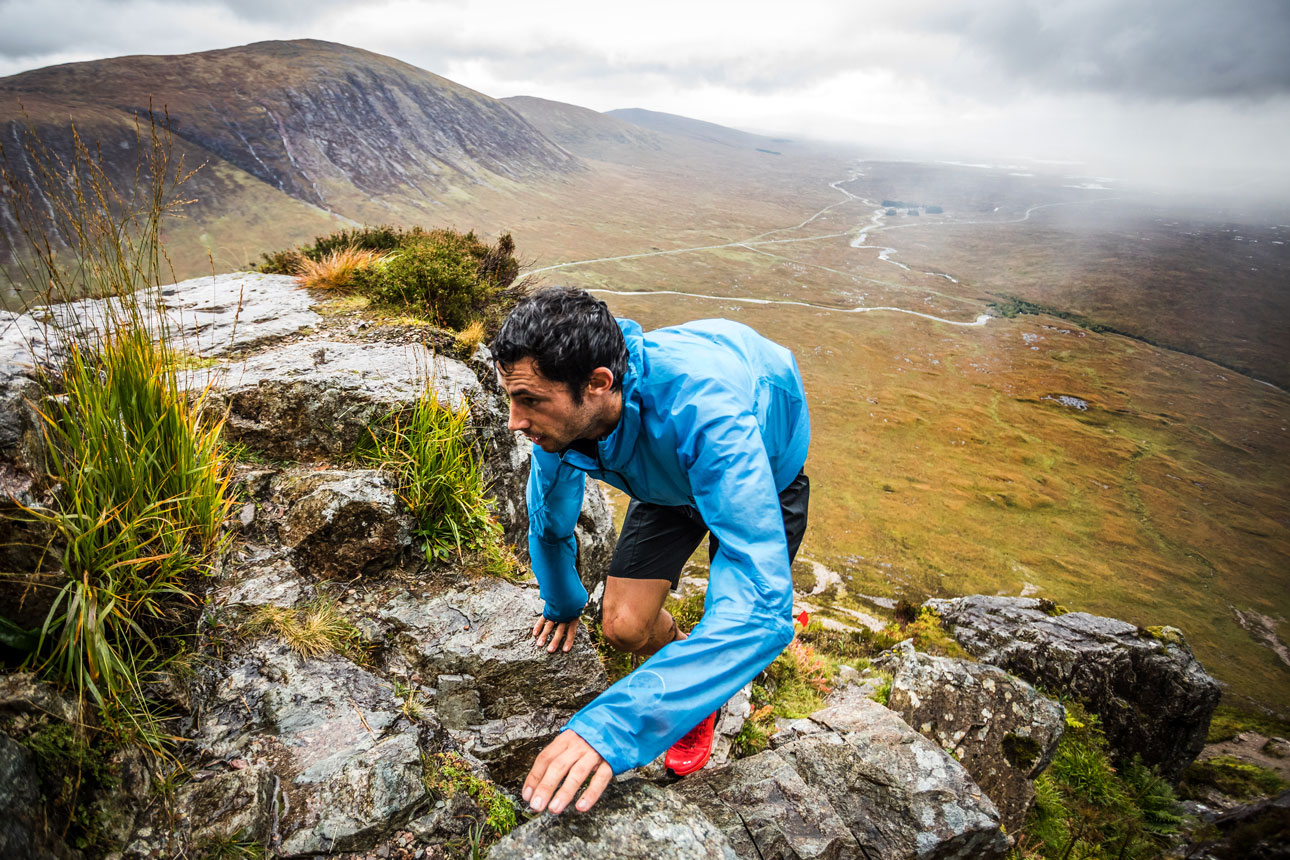 Race winner Kilian Jornet was in his element. “The Scottish Highlands really inspire because you can run everywhere. It’s got good ridges and good elevation and even though it’s not high altitude you can find all the challenges you want. I ran with André [Jonsson] for a big part and then I took the lead to be a bit more relaxed in the last part. He’s a very strong runner. For me it’s more for the participation than winning. These are races that I love.” Jornet closed in 3h40’33” followed in 3h42’33” by Sweden’s André Jonsson. In third in 3h45’03”, a first podium for Italian Daniel Jung. 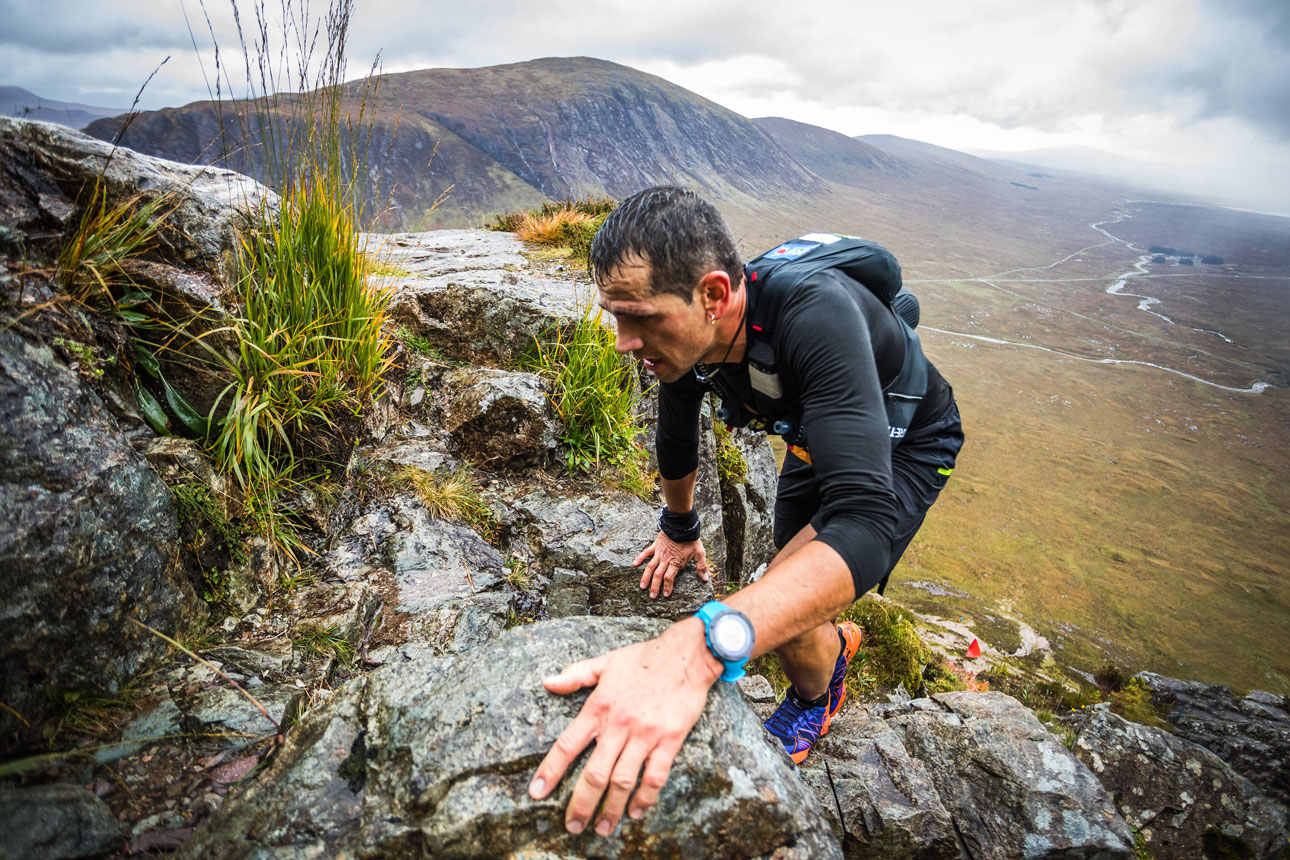 “I got a good position so I feel good. I pushed myself to the limit. It was a great course, technical. I live in the Alps but here it’s more slippery. I love it when it’s raining,” commented Jung. “When you see Kilian and André Jonsson in front, the world champion and second world champion, what more can you ask? It’s a dream for me to be on the podium and so… I love Scotland!”

With less kilometres, vertical climb and ridges, there was still plenty of action in the stacked field especially in the women’s race where a fierce battle raged concluding in a tight sprint. 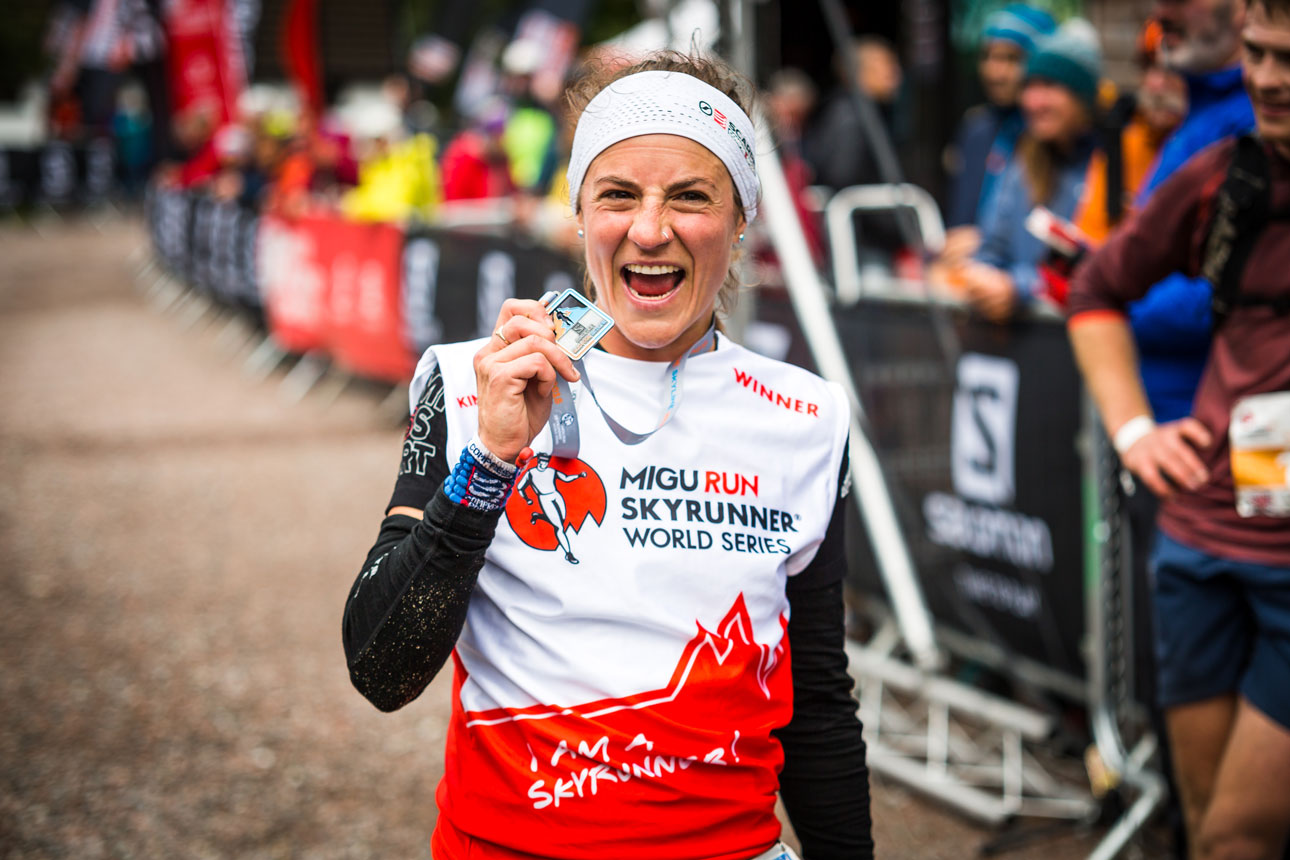 Winner Hillary Gerardi from the USA, who closed in 4h17’48”, summed it all up. “I was really pleased to be at this race although disappointed not to be able to do the whole ridge but it was the right call on the part of the organisers to cut it short. It was pretty cold and wet and very, very windy at the top. I gave it my best. I was a little faster than Jasmin [Paris] on the uphills but she definitely dominates on the downhills and it was really a pleasure to be out there with her.

“Either of us could have won the race. We were together on the last downhill and I said to her ‘What do you think will happen if I manage to hold on to you and we go through the finish together?’ and she said, ‘Oh no! It will come down to a sprint!’ So I just gave it everything I had and in the last 200m I was able to pull ahead of her.

“I will definitely be back next year to do the full ridge. Last year when I came here I was hitting a low point in my season and I found joy in running again in Scotland.” 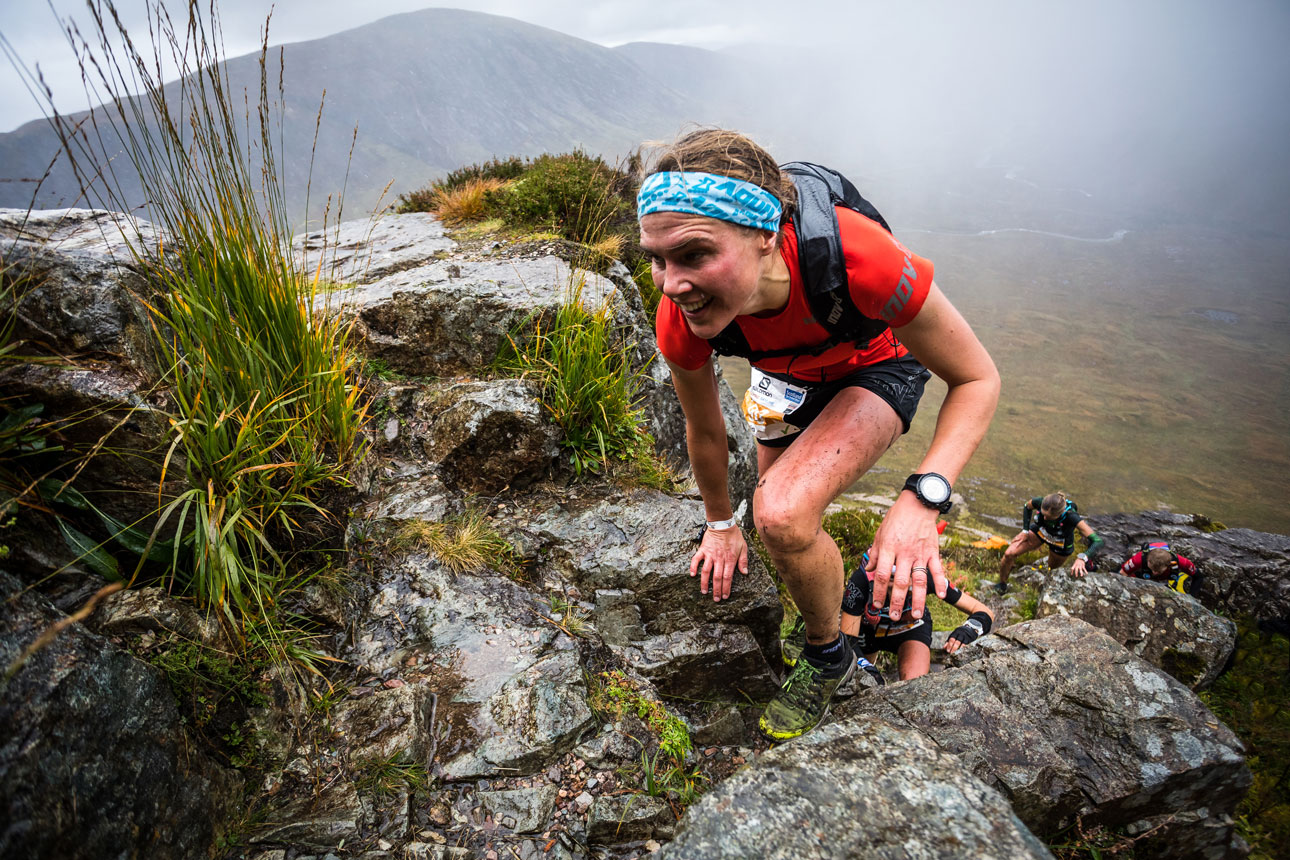 Briton Jasmin Paris lost the sprint by just seven seconds. “It would have been nice to win to be honest. I gave it my best shot but going to the end I couldn’t make up on the downhill and I knew I didn’t have the speed in my legs.”

Third lady was another American, Brittany Peterson. “For me I actually never got cold, it was all a matter of arm sleeves up, arm sleeves down. I was definitely tired by the end just tried to stay strong for third. It was a great race! I love it! I feel like I suddenly got a new element of technical terrain – wet and slippery and mossy which just added a new element of fun. I fell three or four times and just popped right on back. I got really muddy,” she said. “I’ve heard great things about the ridge so I can imagine what the full race would be like. Just doing the Skyrunner World Series I feel it brings a lot of energy!” 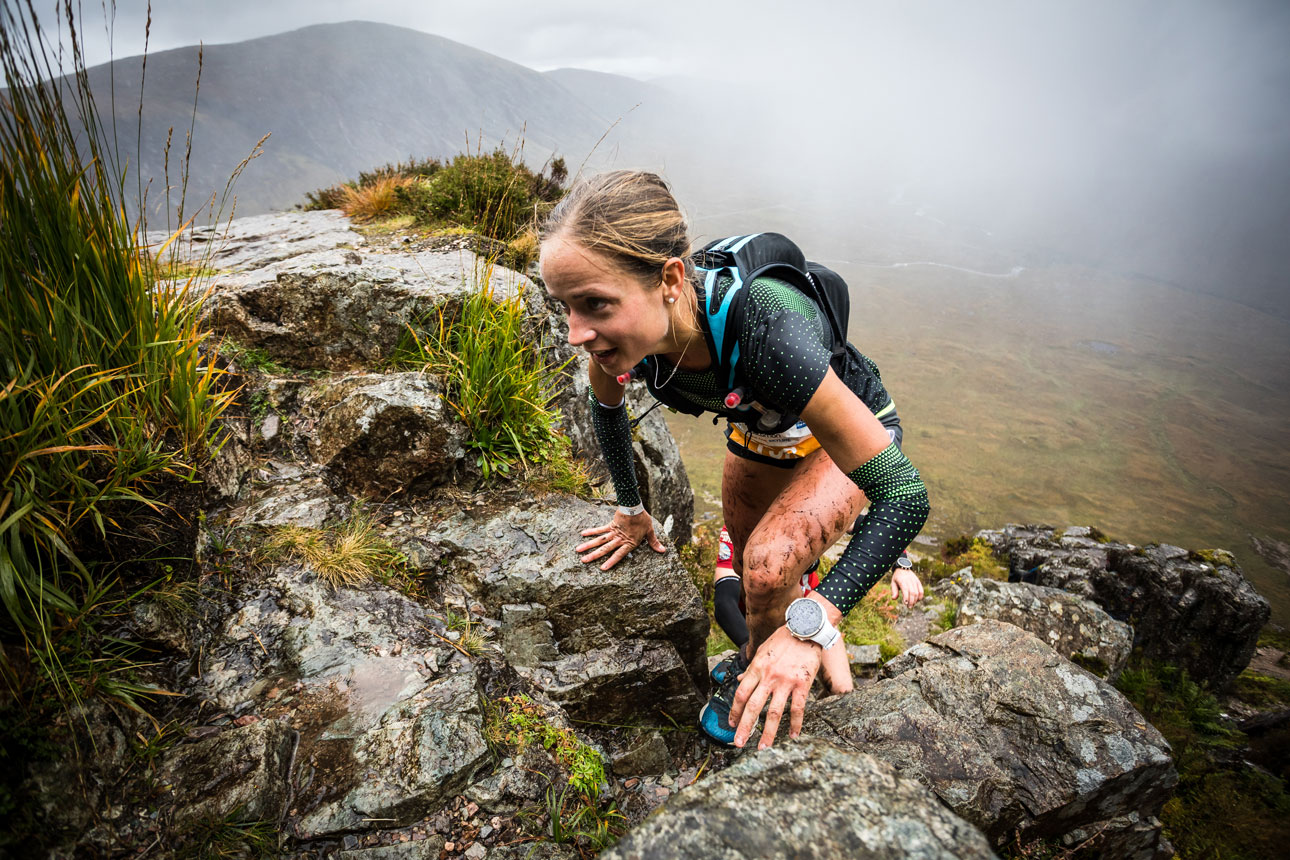 American Brittany Peterson on her way to an excellent third. ©No Limits Photography

André Jonsson climbs to third on the Sky Extra ranking and is 55 points from leader Dmitry Mityaev while Pere Aurell holds onto second.  Kilian Jornet ties with Jonathan Albon in fourth place.

There are no significant changes in the Overall ranking except that Jornet is the new leader.

Next stop on the 2018 Migu Run Skyrunner® World Series is the Salomon Ultra Pirineu in the Spanish Pyrenees on September 29 where the Ultra specialists will be heading for the longest race on the circuit valid for the Sky Extra category.